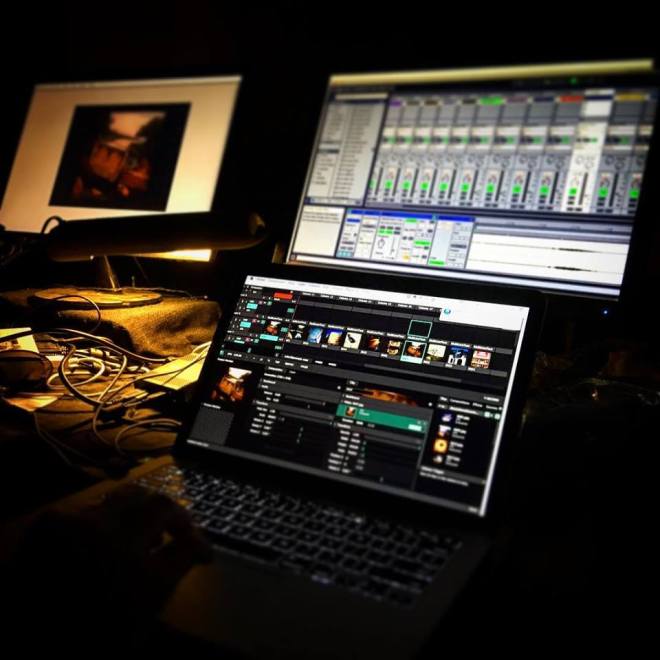 Looks like we may have a debut date for this performance in August/September. Which feels like a truly luxurious amount of development time, in contrast to what I have been used to. The tension, always, in development, is between proficiency and perfection. We want the piece to be clean, intentional, considered, tight… but not stale. Not polished to the point where muscle memory takes over completely and the fresh, what-could-happen-now feeing that is the soul of live performance is smoothed out of existence.

In this collaboration, I err on the side of polish, and he errs on the side of raw immediacy, so the idea is that meeting in the middle will be a good thing.

We presented an 8/16 variation (8 pieces randomly selected from a pool of 16) for Jump-Start’s 8X8 event on April 2, and what I mostly felt, from the audience, was goodwill tempered by confusion. That format didn’t give us an option for a formal feedback session afterward, so I’m just going on what it felt like to be in that room, and on a few comments that were offered to each of us personally after the performance.

Confusion makes sense (and maybe this is why I felt it) because I am confused. This project didn’t start as a concept, it began life as a desire, an impulse to work together in this way, to bring these elements together in some format, and all of the whys are still being figured out, along with the specifics of the hows.

We both write. We both love good words, on the page and spoken aloud. We both love to feel those words in our own mouths when we speak them aloud. We are both photographers. We love finding and recording images that are powerful or mysterious or beautiful or amusing. We wanted to bring these things together, along with his recent work in sound recording and design, my new fascination with the intimacy of the amplified human voice, and our pull (I think I speak for us both here but I definitely speak for me) toward public performance. Toward what happens when you breath the same air, in the same moment, as the person who is experiencing what you are offering. That is a sacred high.

So we put together this idea that combines and calls into existence all the pieces we want to be there (invokes them). And now we have… what? We’re categorized on Facebook as Performance Art because, hey, they ask for a category and that’s a broad one. It fits, but it doesn’t help. There’s no overt message, although there are any number of possible messages embedded in the individual pieces and in the way they randomly combine, enough for each person who sees/hears the show to make their own meaning. But none of those meanings are what we mean – although we do mean to offer the opportunity to find meaning. And, look at that, getting way too meta already.

Last night, after rehearsal, we were talking stuff through (another plug for collaboration here… I would be lost if my brain was responsible, all by itself, for moving us forward) and I had a realizing. Invocation is a concert. A series of short pieces, sound and words intentionally co-created in response to an image, if we were singing those words instead of treating them as prose, you’d know exactly where you were. They hearken back to the era of the “concept album” – the pieces inform each other, were created for the same project and based on some of the same thematic bits of inspiration, but each stands alone as well. The performance is like putting the album on “shuffle” on your player… you’ll hear some (about half) but not all of our repertoire, in an order that may or may not be the way you’d put the pieces together, if you were deejaying. Whether or not that’s the kind of thing you like to do… lie on the floor, trance out, listen to random tracks and divine how and if they go together, and what those connections mean… that seems to be the thing we’re doing.

Now if there was just a category for that. Prose concert? Literary rave? What do you call singer/songwriters when they don’t sing, and they don’t write songs, but otherwise they do the exact same job?

And maybe I don’t need the answers to any of those questions, because my idea about the what of what we’re doing will have changed completely after the next rehearsal, after our next opportunity to show the work to some of our colleagues and harvest their impressions.

Everything could be completely different tomorrow. That’s what I love about development.